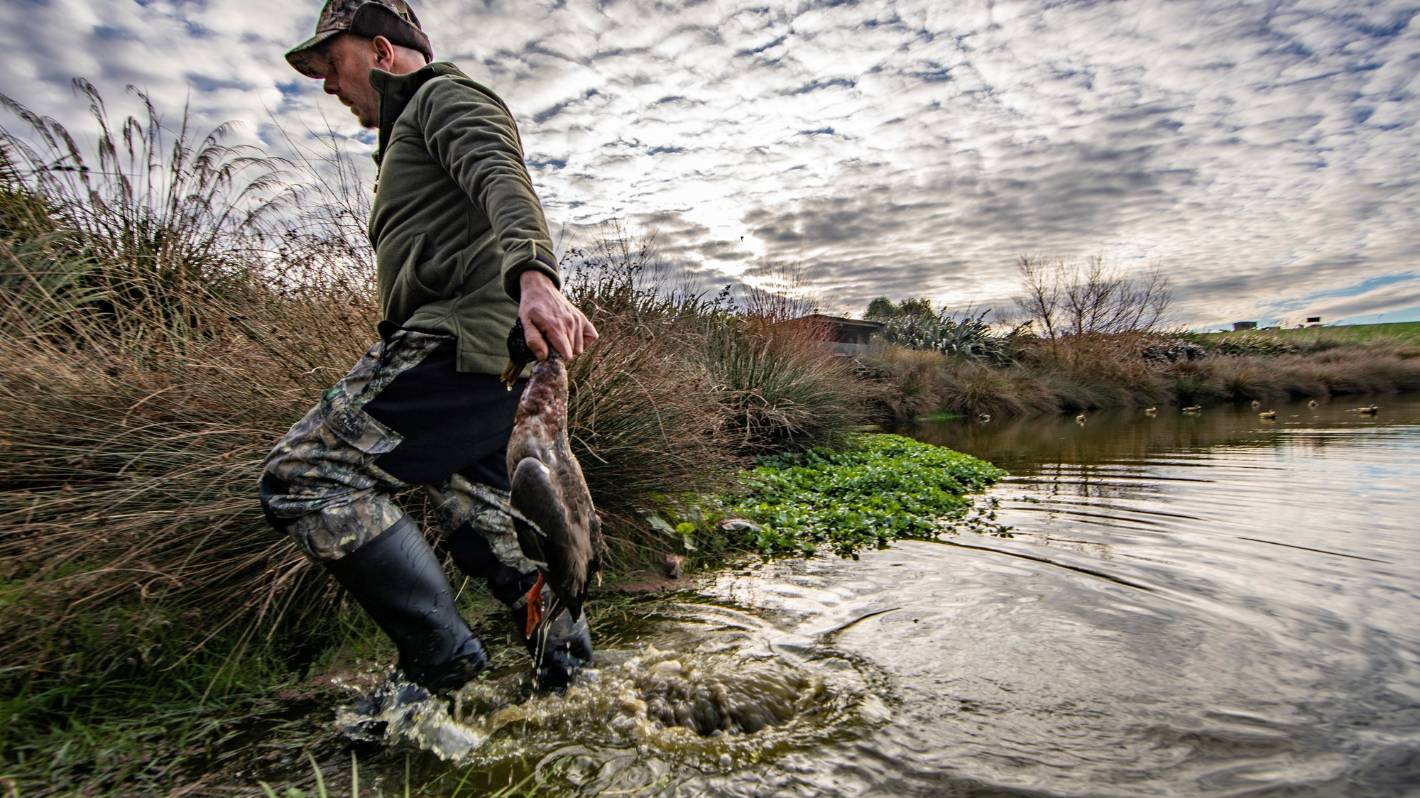 Chefs might be renowned for their fiery temperaments but Angelo Georgalli is taking my disclosure well.

The celebrity chef’s latest book is all about cooking wild animals, and he’s just drawn a promotional short straw: his interviewer is a vegetarian.

For a second there’s silence down the phone line before he laughs and promises there’s still something in the book for everyone, even me.

“Just swap the fish and game for eggplants.”

Georgalli’s third book The Fish + Game Cookbook is right on brand for the man known as ‘The Game Chef’. The recipes are indeed wild and this meat-averse interrogator has a pressing question: “Is a black swan just like an enormous long-necked chicken once it’s plucked?”

Pretty much, the chef says, and of all the birds he’s encountered the swan surprised him the most. It was tasty, easy to cook and had enough meat to feed at least eight people.

“The breasts are huge, the size of a plate. You can go a long way on a black swan, if I was dropped on a desert island and had to choose a bird to take with me that’d be it.”

Now a convert himself, Georgalli says people should give cooking a swan a go themselves, though warns them to stick to the pest species.

“White swans are protected by Her Majesty Queen Elizabeth which could be awkward.”

The swan might have surprised the chef the most, but another strange appearance in the book is that of pūkeko – described as “a wonderful bird to eat”.

Georgalli concedes the idea of cooking swamp hens and swans might be unusual for some New Zealanders, though says it’s one that makes sense on all counts.

Environment-wise, Aotearoa’s lack of predatory animals has seen some bird species flourish way out of control, and hunting them restores some balance. Financially, the high cost of buying meat is now well out of range for many, and health-wise wild game is just better.

“What you tend to eat when you eat wild hasn’t been messed around with. It hasn’t been on antibiotics, it’s mainly organic and even the stress on the animal is minimal.”

Georgalli says with our rocketing cost of living the movement towards self-sustainability is massive, and as it was the way his own family survived he’s keen to help.

One of four children, Georgalli was born in Glasgow before his family returned to his chef father’s home country of Cyrpus. The family spent a blissful few years on their coastal farm until Turkey invaded the country and they had to flee, losing everything in the process.

“We were refugees from that war, and got on a container ship that went to Lebanon. My parents took one suitcase and had four children under 7 years old. I have no memory of it, but my brother Michael says it was pretty tough.”

The family spent about six months in a British army camp before moving to Italy though Georgalli’s dad struggled to find work. Moving to London they settled in a council house in Tottenham where they lived in poverty.

“It was a really dangerous area, but my parents kept us safe.”

It was at that house that a young Georgalli saw first-hand how to carve out a living from the land, any land. His dad turned the long and narrow backyard into a miniature farm, splitting it into two sections to grow vegetables and animals to feed the family.

Georgalli thought it was great fun though remembers the day he realised the giant white rabbits he adored weren’t actually pets.

“One escaped into the neighbour’s vege garden and my dad went over with his walking stick and bopped it on the head.

“I didn’t know he was using them as meat because he didn’t want to hurt my feelings. When the rabbits went missing he’d say he’d sold one or two, I’d ask what was for dinner, and he’d say ‘chicken’.”

Georgalli dropped out of school at 14 and spent his teenage years working at his cousin’s Greek delicatessen, then as a busboy and waiter in London restaurants. Meeting then marrying a New Zealander was how he ended up in Aotearoa where he’s owned nine restaurants and cafes as well as starred in The Game Chef television series.

It’s the books he’s particularly proud of though. It was due to his dyslexia – and the teachers’ inability to help him with it – that he dropped out all those years ago, so it’s a triumph to have three books under his belt. He says this one is extra special, having been written in conjunction with Fish & Game and featuring stunning photos of wild animals and scenery.

As for what’s next? Who knows. On Monday morning Georgalli was in the middle of packing up his Kingston house and heading into an uncertain future, something he says he shares with everyone else in the hospitality game.

The Cambridge Community Gardens were the target of hungry birds back in early 2019.

“Hopefully an opportunity will come up for me there, I have got a food trailer.”

He does have plans involving seaweed, certainly some archery, and is keen to get back into horse riding.

“I don’t stay in one place and do the same thing for long. Maybe it’s the way I was brought up: being shifted around and being in a vulnerable situation as a child.”

One thing is for certain though, while the house doesn’t come with a section there will still be some form of vegetable growing. That’s where it all began after all.

“I’ll do herbs and a large potted wine barrel garden. And more foraging.”

The Fish + Game Cookbook is available from beatnikpublishing.com and bookshops.